Boston hosted a very special ikebana Event (yes, that's with a capital E) last week, and I'm glad I was there, along with hundreds of other ikenobo teachers and learners, Japanese and American. The Fairmont Hotel, the Boston Museum of Fine Arts, and the Back Bay Event Center were filled with a bilingual hubbub, spectacular flowers and arrangements, solemn ceremonial and memorial moments, and laughter, too, during games and workshops.

First, a brief explanation. This blog is about ikebana--Japanese flower arranging, which has a long history and great cultural importance in Japan--and how learning it has opened a door into the world of Japan for me. I began learning about ikebana in a general sense in 2010 and then about a year ago also began studying a particular style of ikebana, ikenobo. (See previous posts for more on this subject.)

Ikenobo is the oldest style of Japanese flower arranging, proclaiming its 550th anniversary of recorded history in 2012. Just recently the headquarters of ikenobo in the United States in San Francisco also commemorated its 45th anniversary. Both anniversaries were celebrated in Boston this month--hence the Event. Boston was selected because it is the sister city to Kyoto, where the headquarters of ikenobo in Japan is located.


The ikenobo headmaster, Sen'ei Ikenobo, known as the iemoto, and his daughter Yuki, his designated successor, traveled to Boston for the three-day celebration, accompanied by many Japanese teachers and students.On the agenda for the Event were two days of ceremonies and one full day of workshops. Among the ceremonies was a memorial on March 11 to the thousands who lost their lives in the earthquake and tsunami that struck Japan exactly two years before. The workshops were taught by Japanese professors in the three particular forms of ikenobo: rikka, shoka, and free-style. Rikka is the oldest and most difficult to master of the forms.

To the left is my effort at shoka shofutai, the classic original form of shoka. Below is my effort at free style, which is actually more challenging for me because there are no set rules to follow--the arranger is free to style it as he or she wishes, while keeping in mind the basic tenets of ikebana. 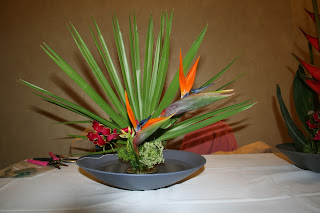