Search for the place of origin of ikenobo, Part 2 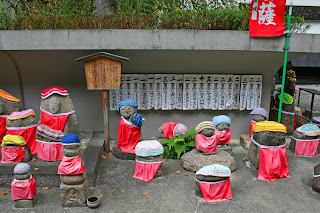 In the last post I wrote about finding in Kyoto Rokkakudo, the ancient temple that is considered the birthplace of ikenobo, the oldest style of ikebana. The photo to the left is of small statues near the temple. Of course I was drawn to them immediately. They are so appealing under their knitted caps. But I have also done some research in order to find out what these little figures represent. I don't think I understand well enough to explain their presence, but I hope some of my readers will know much more than I and can offer some comments that will help us all to comprehend better their meaning.

However, I do now know that the red color of their bibs is related to this: "According to Japanese folk belief, RED is the color for 'expelling demons and illness.'"(http://www.onmarkproductions.com/html/color-red.html) So the red color expresses the hope for recovery and protection from evil influences and sickness.
While this has nothing to do with the history of ikebana (as far as I know), I found the presence of these well-dressed little statues near the Rokkakudo Temple an irresistible draw. 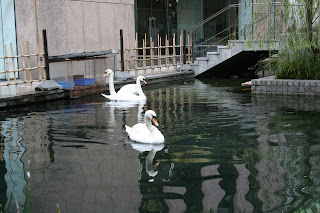 Another aspect of the temple's environment and one very directly associated with the history of ikebana is the pond pictured to the right. I certainly didn't expect to see a pond with swans gliding on it located between Rokkakudo Temple and the featureless skyscraper next to it. The building you can see in the background of the photo is the headquarters of the School of Ikenobo, and this little pond is said to be the source of its name. Ike means pond, and bo refers to a Buddhist priest's hut. Thus, ikenobo would mean a priest's hut next to a pond, apparently the place of origination of the floral art form first practiced here.

Search for the place of origin of ikenobo, Part 1 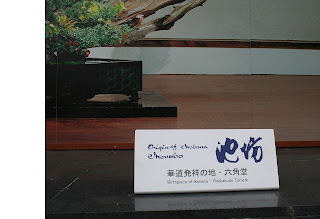 I knew I would have some time in Kyoto to search for Rokkakudo Temple, the birthplace of ikenobo, the style of ikebana I'm studying. I figured I could find it if I pored over maps and learned how to get near it on the metro. My ikenobo teacher, Dan dell'Agnese, is acquainted with Kyoto and told me that the trick is to find a small temple hidden by surrounding tall buildings. He said I could be right there and miss it.
So I studied the metro map, found the correct stop,  and invited two companions to accompany me, figuring that six eyes would be better than two. So Barb, Annie, and I followed the city map exactly and knew we were right where the temple should be, but, as predicted, we couldn't see anything but ordinary, modern business buildings. The Rokkakudo is decidedly not ordinary, being six-sided, with ancient, sloping tile roofs. So it should immediately stand out from everything else. It didn't.  However, two contemporary modern buildings did: a skyscraper with the sign in the above photo in its window saying  "Origin of Ikenobo Ikebana" and a Starbuck's. The sign told me we were near our target. A young woman was standing in the doorway of the Starbuck's ready, in welcoming Japanese style, to greet us with "Irasshaimase." I figured we should ask her for help and hope she understood the question. At least I knew, more or less, how to pronounce the temple's name. So we approached her, bowed, and I asked.

She smiled and pointed inside the Starbuck's. I thought, "She didn't understand the question. She just wants us to come in." Then I saw through the open door of Starbuck's a glass wall, and on the other side of that wall were tile roofs slanted in many different directions. Rokkakudo. Right there, on the back side of Starbuck's. But how to get there? 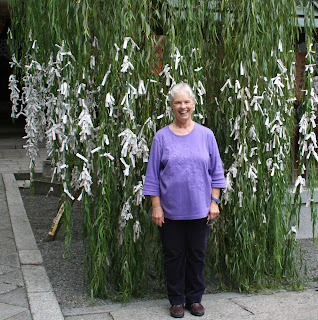 We hurried around the corner, and there it was. The picture above shows me standing by a weeping willow in the courtyard in front of Rokkakudo. Tied on the branches of the willow are slips of paper with fortunes and hopes written on them, among them one handwritten in English from me--that I would be a good student of ikebana.

Next door to the temple is a skyscraper office building that houses the headquarters of  the ikenobo school of ikebana. The sign I saw sits in its window. But the temple Rokkakudo is where it all began.