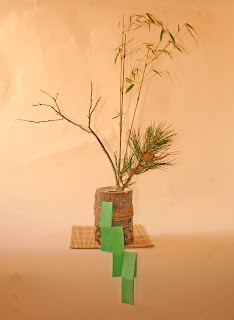 In Japan the New Year is greeted with celebration and good wishes, just as it is in the USA, but the displays and decorations are quite different. Instead of having New Year's symbolized primarily by champagne glasses, Times Square, and confetti, in Japan one sees floral arrangements known as kadomatsu. Though these arrangements differ greatly in size, color, and ornamental additions, they traditionally include three plants--pine, bamboo, and plum (branches). If you google the word kadomatsu and then look at the images a search will bring up, you can see the enormous variety of the kadomatsu displays.


"According to Iwao Nagasaki, curator of textiles at the Tokyo National Museum, many patterns that first came from China...acquired unique meaning to Japanese over the years." The Chinese thought the grouping of these three plants "just symbolized the innocence of three good friends in winter: bamboo, which never breaks, the pine, which stays green all year, and the plum, which blooms while it's still frosty. One thousand years after the pattern entered Japan...this trio of plants became auspicious." * In other words, this popular arrangement of the three plant friends in Japan has become a physical, floral wish for good fortune in the coming year, particularly for strength, longevity, and the ability to flourish in spite of adversity.

The arrangement you see above is my first attempt to put these three plants together in a shoka design (a particular type of ikenobo arrangement) especially for New Year's. The bare stem to the left is ornamental purple-leaf plum (Prunus cerasifera). If I had access to plum branches in Japan, they might already have burgeoning buds on them in that milder, moister climate. Unfortunately, here in drought-stricken, high-altitude New Mexico where the temperatures are well below freezing, the plum is just a branch with buds waiting for warmer days still a month or two away. The plant in the center is a cold-hardy bamboo I grow in a container, located right now on my back porch with a furniture blanket wrapped around its feet. It's a Fargesia 'Rufa.' I've trimmed many of the bunches of leaves off of it in the interest of a more sculptural shape, one of the techniques of ikebana. The plant to the right is pine, an ornamental that was planted in my neighborhood, not necessarily native.

A traditional kadomatsu arrangement is usually placed outside the door of a home or other building. The plants are often arranged in a rustic-looking container with a special rope called shimakezari and a shide design attached. So, my three friends above are arranged in a container that is a hollowed-out mulberry branch from my yard (I always save some of what the arborists remove from my trees). A neighbor who is a woodworker hollowed enough of the tough wood out so that I could use it for an ikebana container. I've wrapped natural twine around the container several times and hung my own crudely homemade version of shide, a zigzag design often found on Shinto shrines and other places or objects sacred to Shinto. The result is an ikenobo ikebana version of a New Year's display that is older even than ikebana itself, a display that extends a millennium back into Japanese history and the introduction of Buddhism into the country.

I like the idea of beginning my new year with such an ancient tradition rooted in the natural world. Happy New Year to you!

Posted by Unknown at 9:21 PM No comments:

What is a tokonoma and why does it matter?

This blog is about ikebana; the process I, a novice, am going through to learn an ancient and complicated art form; and the simultaneous process of becoming fascinated by and learning about Japan.

When you walk into an American living room, you are likely to notice first a fireplace and mantel or a conversation area with couches and chairs around a coffee table or maybe a giant TV screen or, at this time of the year, seasonal decorations. If you were to walk into the traditional Japanese counterpart of a living room, you might first notice the tokonoma. One of the very first things I learned about ikebana is that it is placed in the tokonoma, an alcove in a room in a Japanese home or in a teahouse.

The photograph below left shows such an alcove. I took it of the Sekka-tei Tea House near the Golden Pavilion in Kyoto. A tokonoma is intended for the display of art--usually a scroll, and to the left of the scroll, an ikebana arrangement. Unfortunately I don't read Japanese, so I don't know what the plaque to the left of the scroll says, but it is located where one would expect to find an ikebana design. Note the natural wood post on the left side of the alcove; it's called a tokobashira. It's made of nandina wood. 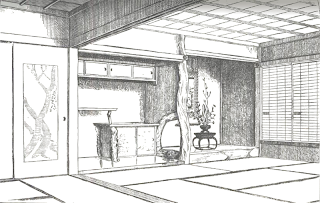 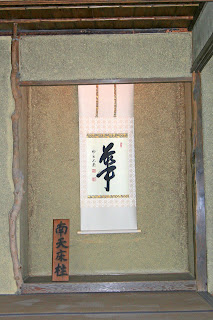 The image to the right is entitled "Guest room in Hachi-Ishi" from Japanese homes and their surroundings by Edward S. Morse, first published in 1886. Again, you can notice the alcove with its hanging scroll, ikebana arrangement, and tokobashira. (I'm indebted to Wikipedia Media Commons for making this image available.)

So what can we western practitioners of ikebana learn from this?
We can recognize that ikebana was intended to be a prominent feature in the decor of the room where guests were welcomed. It had a special place of honor in the home or during the tea ceremony. It was considered an art form. I think this helps us to understand better how ikebana has developed and the importance it has in its native culture.

Ikebana International (http://www.ikebanahq.org/), the international organization of people who love the floral art form given to the world by Japan, has recently been emphasizing the importance of teaching ikebana to children. Like other art forms that children learn when young--such as painting, working with clay, singing--ikebana can imbue youngsters with appreciation for beauty and for their own creative abilities. They can also learn to really see the world of plants around them, not just their colors but also their sculptural organic forms.

At Thanksgiving, when I visited my son and daughter-in-law and two young granddaughters in California, we did what I hope will continue whenever we're together--make a flower arrangement. In the first photo above, I'm in the garden with my older granddaughter, Skye, age 2 1/2, selecting flowers to cut (Grandma's in charge of wielding the scissors, of course). California weather is conducive to lovely flowers all year, so we had no trouble finding pretty ones that Skye liked even in November. Then we went inside to put the flowers into a container that my son, her daddy, had crafted some years ago. I didn't want to use a kenzan, too sharp for little fingers, nor did I want to use oasis, so I crumpled up a bit of plastic mesh and put it into the container so that we could insert the flowers into it. We also gathered some leaves. Skye actually put the flowers into the container as she wanted, and the second photo shows me trying to insert some leaves that she also wanted but whose stems were too short. We had fun doing the arrangement (actually she did two, as we had flowers left over), she was very proud of them when we finished, and they graced the Thankgiving dinner table. Not ikebana yet, but a beginning pleasure in selecting and arranging plants.
The photos are courtesy of Laura and DeLesley Hutchins.

Posted by Unknown at 4:25 PM No comments: