How did you fall in love with Japan?

The title of this blog--ikebana opens door to Japan--points to what seems to be a mystery in my life. Until 2010 when I first became aware of ikebana, I had only a slight acquaintance with Japanese arts. I knew a little about anime and origami, which I had learned from my son's interest in them. I knew a bit more about haiku and renga because I'm a poet and have written and published haiku (most recently in Lifting the Sky, Southwestern Haiku & Haiga, published by Dos Gatos Press ( http://dosgatospress.org) this year). But when I began to learn about ikebana, first in general, and then more specifically as a student of the particular style and tradition known as ikenobo, suddenly I was hungry to learn as much as I could about Japan, its history, and its culture. I was astonished by my own insistent passion and really didn't know where it came from or where it would lead. 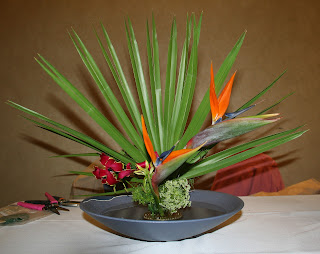 The result is that not quite three years later, I've read many books about Japan, have traveled to Japan once, and am progressing in the study of Japanese flower arranging and of the Japanese language itself. Why? I still don't know the answer to that, but I'm not letting that stop me. This has been an exciting journey so far.

I sometimes wonder if others have had the same experience, to fall in love with a culture you have no prior connections to. I live in the arid landscape of New Mexico, unimaginably distant from the green island nation of Japan. The Albuquerque Journal (http://www.abqjournal.com/main)  ran a story this past Sunday (June 23) of just such a person as I've wondered about, a woman who has had an experience similar to mine. (I don't know her except through the article.)

Her name is Hispanic, Anita Gallegos. She also fell in love with Japan, only it lured her through a different doorway---the martial arts. From there she, like me, began to study Japanese history, culture, and language. And then--taiko drumming. According to the newspaper she "came to love the symmetry, discipline, and choreography of taiko drumming." Almost the same could be said of me, but for me it would be "the asymmetry, discipline, and sculptural form" of ikenobo ikebana.

If you are reading this blog, you must have an interest in ikebana or Japan or both. Do you have a story similar to ours? If so, please share it in the comments section below.
Posted by Unknown at 9:07 PM 2 comments: