A day in Kyoto, beginnings of ikebana

Japan, October 2012. I had a day to spend as I wished in Kyoto. I wanted to see two places important in the beginnings of ikebana and its particular, oldest style known as ikenobo. One of those places was Ginkaku-ji or the Silver Pavilion (pictured below), one of a group of buildings constructed as a retirement home by Yoshimasa, the 8th Ashikaga shogun (1443-1473). How it came to be called the Silver Pavilion when it is not silver at all is another story, but it is important in the history of Japanese culture for several reasons, only one of which I mention here. (I urge you to read Donald Keene's book, Yoshimasa and the Silver Pavilion to learn much more). AshikagaYoshimasa was a complete failure as a shogun, but he had good taste--in buildings, paintings, gardens, and flower arrangements--which greatly influenced the development of Japanese culture. 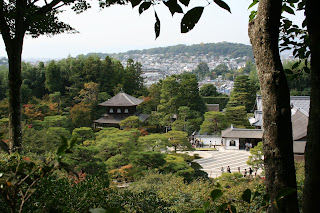 The Japanese people had always admired and valued the beauty of flowers and other plants and had made floral offerings at Buddhist temples (see previous 11/9 entry on Nikko), but it was not until Yoshimasa's time that flower arranging had come to be considered an art form. Yoshimasa enjoyed several arts, and his palace at Higashiyama (the location of the Silver Pavilion) was decorated with floral displays. 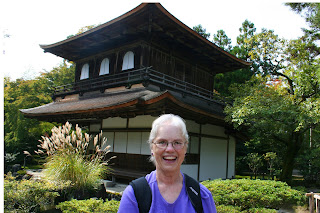 According to Donald Keene, the "oldest surviving account of someone arranging flowers at the court is dated April 20, 1476." It was then apparently called "standing" rather than "arranging" flowers and was probably done in the rikka style, an early form of ikenobo invented by Senkei in 1462.
Posted by Unknown at 9:27 PM No comments: 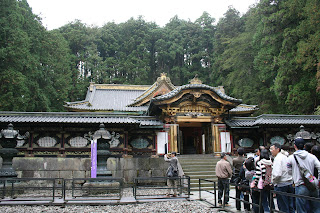 I haven't written in this blog for a while, and the image above helps to explain why. I took the photo on October 26 at Nikko, a World Heritage Site a few hours away from Tokyo. The building shown is the entrance gate to the Haiden of the Taiyuin-byo Shrine. Surrounding the buildings are tall Japanese cedars. This building is only a single part of a very large grouping of spectacularly adorned shrines and temples set  appropriately in a magnificent mountain forest. I chose this particular structure for this blog entry because of what I saw but could not photograph inside it. A guide who spoke only Japanese took the waiting group inside the Haiden, where we sat on tatami mats and listened to him. Since I couldn't understand what he was saying, I looked around the large room where we seated. On the ceiling above were a multitude of golden dragons. In front of me on the left and right of the guide, probably a Buddhist cleric, were sculpted metal flower arrangements, perhaps bronze. The one to the right appeared to be a lotus arrangement, often seen in Buddhist temples. But to the left was an arrangement that appeared to me to be a rikka design (or at least similar to a rikka), one of the oldest styles of ikebana design. I was pleased to see the large flower arrangement sculptures in such a sublime setting. Ikebana originated hundreds of years ago from floral offerings in Buddhist temples. 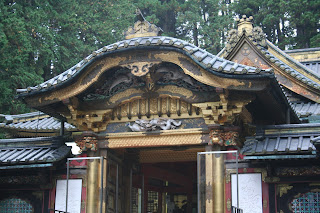 Since this blog is entitled "ikebana opens door to Japan," the next several entries will be about my visit to Japan. Without my interest in ikebana, I never would have learned so much about Japanese history and culture and then wanted to go there. Ikebana truly opened the door to Japan for me.

Posted by Unknown at 4:43 PM No comments: